HALIFAX, NS December 15, 2021 – Fortune Bay Corp. (TSXV:FOR, FWB:5QN) (“Fortune Bay” or the “Company”) is pleased to announce 2022 exploration plans for its three 100% owned Projects located in northern Saskatchewan (see Figures 1 and 2). These include the Strike and Murmac (formerly Goldfields West) Uranium projects, and the Goldfields Gold project (collectively the “Projects”). The Projects are all located within 25 kilometres of Uranium City, where the Company has established an operational base.

Dale Verran, CEO for Fortune Bay, commented, “With the close of our $6.9 million financing we are fully-funded for next year’s expansive exploration programs which are focused on making new discoveries. At Strike Uranium, the comprehensive historical survey dataset from the mid-2000’s has allowed us to rapidly advance this project and develop an initial set of targets which meet the criteria for high-grade basement-hosted uranium deposits. A planned winter ground gravity survey is aimed to further prioritize targets before we embark on a maiden drilling campaign. Plans for Murmac Uranium include drill target generation through continued data interpretation and a winter VTEM and ground gravity survey, followed by an inaugural summer drilling program to test prioritized targets. At the Goldfields Gold project, our team has developed drill targets between the Box and Athona gold deposits which have the potential to deliver the next gold discovery within the Goldfields Syncline. The coming year is poised to be an exciting year for the Company with potential value catalysts on multiple fronts.”

The recently acquired Strike Uranium Project (“Strike”) is endowed with a modern (mid-2000’s), comprehensive historical exploration database from numerous uranium-focused surveys, including airborne and ground geophysical surveys, ground radiometric surveys and geochemical and reflectance spectrometry (clay) surveys. Despite positive results and documented recommendations in historical assessment reports to advance the project, the targets generated were never drill tested. This previous exploration work identified prospective graphite- and sulphide-bearing electromagnetic (“EM”) conductors that due to their physical properties predominantly manifest as valleys and topographical lows, covered by overburden and small shallow lakes. These “blind” conductors have therefore not been explored by surface prospecting. Geochemical sampling from outcrop at valley edges along the conductor traces has confirmed the presence of encouraging pathfinder elements, as well as favorable clay alteration including dravite, illite and kaolinite. Furthermore, the area is known to be endowed with historical uranium occurrences, including the Tena occurrence with over 1,000 tonnes mined at 0.6 to 3.5 % U3O8 (Source: Saskatchewan Mineral Deposit Index #1511, NTS74N11). The known uranium occurrences were discovered along valley edges, immediately off the conductor traces, where outcrop is available and surface prospecting was possible, leaving the conductor targets at these localities untested. The Company has carried out internal review of historical datasets and has generated an initial set of ten priority target areas. Exploration plans for 2022 include:

The Murmac Uranium Project (“Murmac”), formerly the Goldfields West Project, hosts a 12 kilometre-long package of prospective graphite-bearing EM conductors, as defined by historical (pre-2000) airborne and ground geophysical surveys. The area has been subjected to surface prospecting up until the 1980’s which identified numerous high grade uranium surface showings, but similar to the Strike Project, this historical work focused on outcrop while the EM conductors located within the valleys were not amenable to surface prospecting. Significant portions of the EM conductors, which are hosted in favorable brittle surrounding lithologies cross-cut by large-scale regional structures, remain unexplored. Exploration plans for 2022 include:

Historical drilling in the Goldfields Syncline (the “Syncline”) has overwhelmingly focused on resource delineation at the Box and Athona gold deposits, and on exploring smaller gold occurrences, discovered during early surface prospecting prior to 1950. Large prospective portions of the Syncline remain untested and Phase 1 drilling at Box and Athona during 2021 has demonstrated the potential for a broader mineralized system. A geophysical and geological targeting review has been underway during the second half of 2021 and has generated exploration targets for drill testing across the 2.5 kilometre extent of the Syncline. Targeting criteria include prospective geological settings based on the known mineralization controls for Box and Athona. Exploration plans for 2022 include:

The Company is pleased to have secured the services of reputable and experienced contractors to support the planned 2022 exploration activities:

A drilling permit is in place for Goldfields which is valid until October 31, 2022, and an amendment has been requested to include the planned drilling for Murmac (Goldfields West). Ground geophysical survey and drilling permit applications for Strike were submitted on September 2, 2021 and are expected to be granted prior to December 31, 2021. A ground geophysical survey permit application was submitted for Murmac (Goldfields West) on October 21, 2021, which is expected to be granted early in the new year.

Unless otherwise stated, the historical results (including drill results) contained within this news release have not been verified and there is a risk that any future confirmation work and exploration may produce results that substantially differ from the historical results. The Company considers these results relevant to assess the mineralization and economic potential of the properties.

Fortune Bay Corp. (TSXV:FOR, Frankfurt: 5QN) is an exploration and development company with 100% ownership in two advanced gold exploration projects in Canada, Saskatchewan (Goldfields Project) and Mexico, Chiapas (Ixhuatán Project), both with exploration and development potential. The Company is also advancing the 100% owned Strike and Murmac (previously “Goldfields West”) uranium exploration projects, located near the Goldfields Project, which have high-grade potential typical of the Athabasca Basin. The Company has a goal of building a mid-tier exploration and development Company through the advancement of its existing projects and the strategic acquisition of new projects to create a pipeline of growth opportunities. The Company’s corporate strategy is driven by a Board and Management team with a proven track record of discovery, project development and value creation. Further information on Fortune Bay and its assets can be found on the Company’s website at www.fortunebaycorp.com or by contacting us as info@fortunebaycorp.com or by telephone at 902-334-1919.

Information set forth in this news release contains forward-looking statements that are based on assumptions as of the date of this news release. These statements reflect management's current estimates, beliefs, intentions, and expectations. They are not guarantees of future performance. Words such as “expects”, “anticipates”, “targets”, “goals”, “projects”, “intends”, “plans”, “believes”, “seeks”, “estimates”, “continues”, “may”, variations of such words, and similar expressions and references to future periods, are intended to identify such forward-looking statements. Fortune Bay Corp. (“Fortune Bay” or the “Company”) cautions that all forward-looking statements are inherently uncertain, and that actual performance may be affected by a number of material factors, many of which are beyond Fortune Bay's control. Such factors include, among other things: risks and uncertainties relating to metal prices, changes in planned work resulting from weather, COVID-19 restrictions, availability of contractors, logistical, technical or other factors, the possibility that results of work will not fulfill expectations and realize the perceived potential of Fortune Bay's mineral properties, uncertainties involved in the interpretation of drilling results and other tests, the possibility that required permits may not be obtained in a timely manner or at all, risk of accidents, equipment breakdowns or other unanticipated difficulties or interruptions, the possibility of cost overruns or unanticipated expenses in work programs, the risk of environmental contamination or damage resulting from the exploration operations, the need to comply with environmental and governmental regulations and the lack of availability of necessary capital, which may not be available to Fortune Bay, acceptable to it or at all. Fortune Bay is subject to the specific risks inherent in the mining business as well as general economic and business conditions. Accordingly, actual, and future events, conditions and results may differ materially from the estimates, beliefs, intentions, and expectations expressed or implied in the forward-looking information. Except as required under applicable securities legislation, Fortune Bay undertakes no obligation to publicly update or revise forward-looking information. Fortune Bay does not intend, and does not assume any obligation, to update these forward-looking statements, except as required under applicable securities legislation. For more information on Fortune Bay, readers should refer to Fortune Bay's website at www.fortunebaycorp.com. 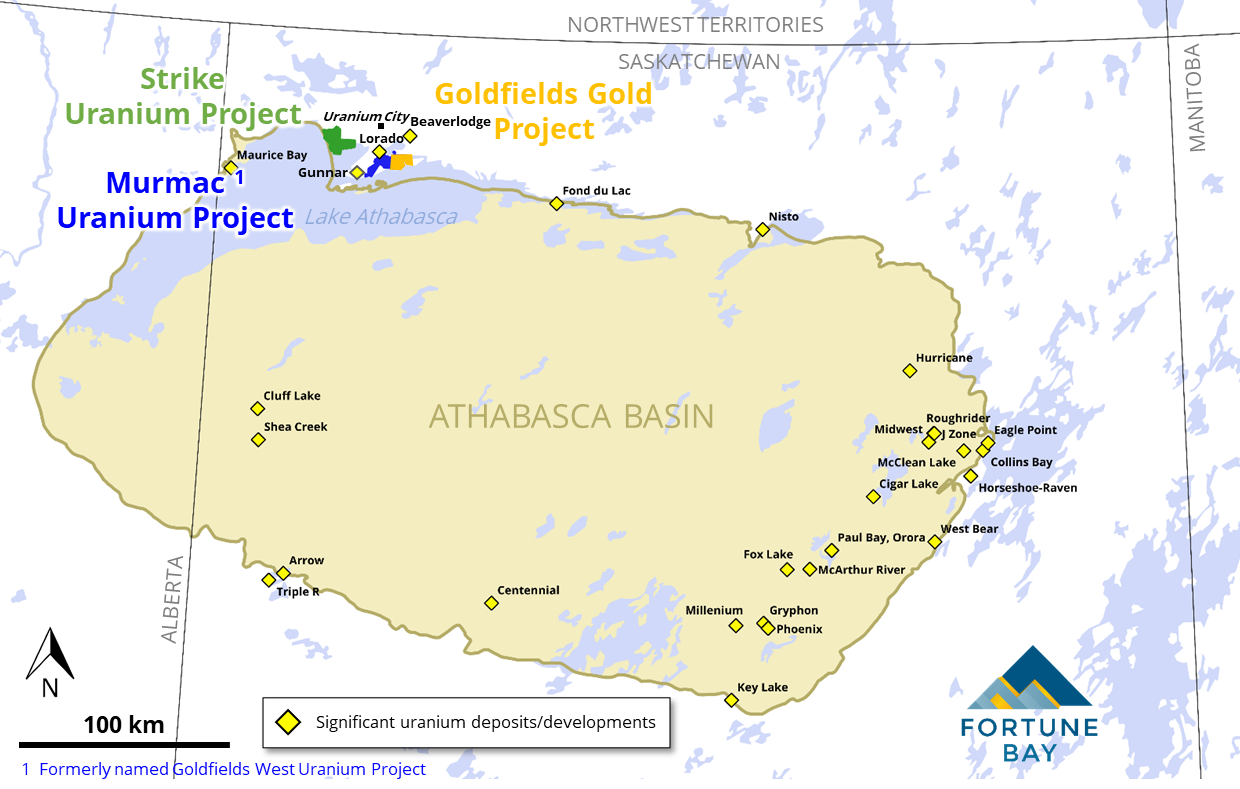 Figure 1: Location of the Goldfields, Strike and Murmac Projects relative to the Athabasca Basin.

Figure 2: Location of the Goldfields, Strike and Murmac Projects.

To view the source version of this press release, please visit: