Results included near-surface intersections of elevated radioactivity (measured in counts per second or “cps”), between 20 and 150 metres below surface, within prospective graphitic units associated with favourable structure and hydrothermal alteration.

“This exploration drilling program represents our first pass testing Murmac for high-grade uranium deposits. The initial results demonstrate we are exploring fertile corridors for these deposits, and importantly, the intersections of elevated radioactivity within a number of drill holes indicate potential proximity to high-grade uranium mineralization. The Project has significant scale with over 30 kilometres of prospective graphitic rocks, and we see potential to make new discoveries through the follow-up of these results and testing of numerous other targets on the Project.” commented Eric Bort, Exploration Manager for Fortune Bay.

Dale Verran, CEO for Fortune Bay, added “Nuclear energy is set to play a critical role in the drive toward a clean energy future, and now is the time to be exploring for uranium resources to meet the demand from the growing number of nuclear reactors globally. The Company’s uranium projects present compelling exploration opportunities, with the right geological ingredients for Athabasca Basin basement-hosted uranium deposits, and proximity to local infrastructure within a historical uranium mining district in Saskatchewan.”

A total of 15 drill holes (3,168 metres) were completed at Murmac between June 16 and August 7, 2022 to test targets documented in the News Release dated June 16, 2022 along the Pitchvein, Armbruster and Howland Corridors. Drill holes targeted compelling geophysical features selected from VTEMTM (electromagnetic and magnetic) and ground gravity datasets, often associated with favourable structural settings and historical exploration results of interest. Operational efficiencies during the drilling program allowed the Company to increase the previously announced drill meterage from an estimated 2,500 metres to 3,168 metres.  Drill hole collar information is summarized in Table 1, drill hole locations are shown in Figure 3, and select drill core photographs are provided in Figure 4 and Figure 5. 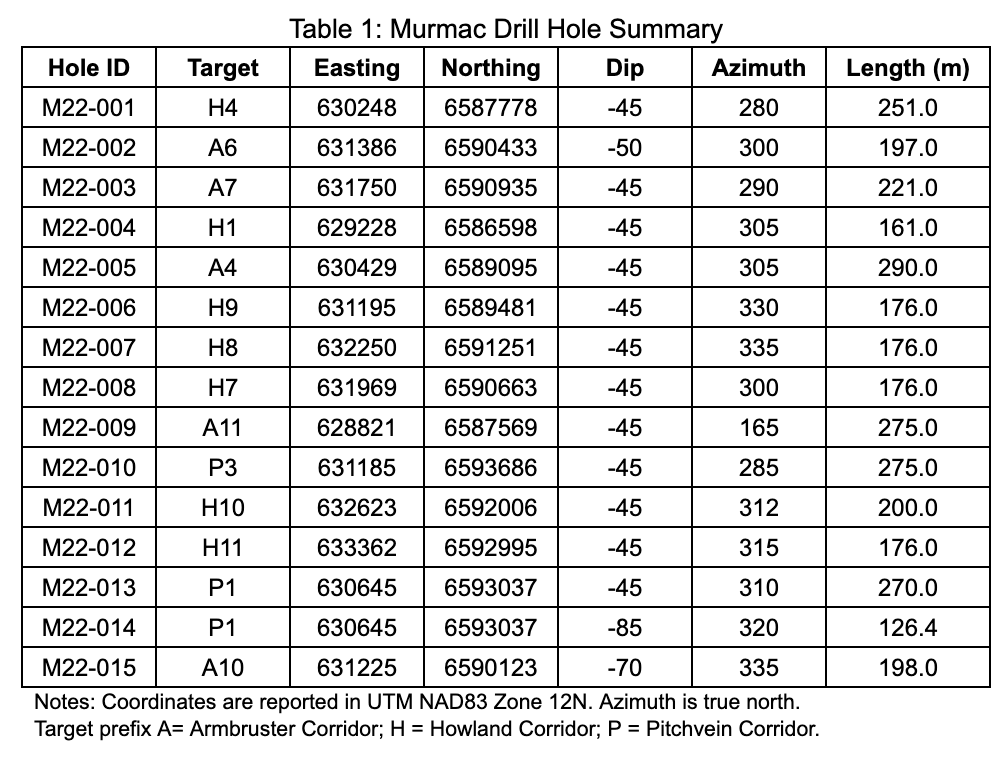 A summary of elevated radioactivity (>300 cps) encountered is provided in Table 2, with descriptions of the relevant lithological, structural and alteration features. Final drill results will be announced following receipt of uranium assay, geochemical and reflectance spectrometry data. 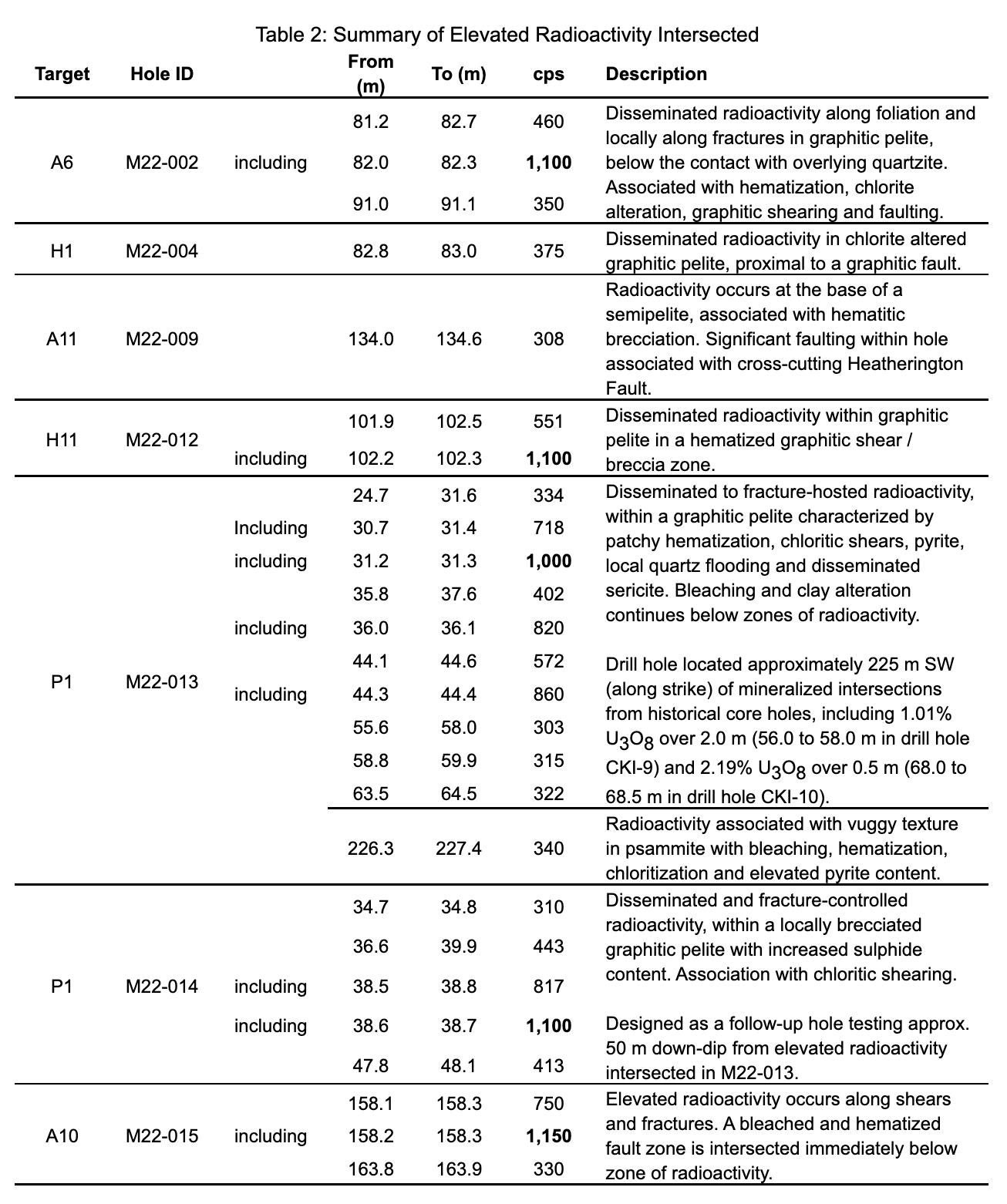 Notes:  Radioactivity is total gamma from drill core measured with a Super-SPEC RS-125 handheld spectrometer reported in counts per second (“cps”). The cps values are averages for the reported drill interval. The Company considers values > 300 cps to be elevated for the Project based on measurement of background lithologies. Measurements of total gamma cps are an indication of the presence of uranium, thorium and/or potassium, but may not directly correlate with chemical uranium assays. Total gamma cps results are preliminary in nature and may not be used directly to quantify uranium concentrations in the drill core samples. True thicknesses of the drill core intersections are yet to be determined. Target prefix A= Armbruster Corridor; H = Howland Corridor; P = Pitchvein Corridor.

The Company also announces that at its Annual General and Special Meeting of Shareholders (the “Meeting”) held on June 20, 2022, the Company’s disinterested common shareholders approved the adoption of its amended DSU Plan (the “Plan”). Under the amended Plan, the maximum number of common shares which the Company may issue from treasury in connection with the redemption of DSUs granted under the Plan has been increased from 500,000 to 1,000,000. The Plan is fully described in the Company’s management information circular dated May 16, 2022 (the “Circular”). The full text of the Plan is also appended to the Information Circular as Appendix “B”, a copy of which has been filed on SEDAR at sedar.com under the Company’s profile.

All drilling is being carried out with NQ2 or NQ diameter. Radioactivity measured in counts per second (“cps”) has been measured using a Super-SPEC RS-125 Scintillometer. The measurements reported in this News Release are the measurements over 0.1 metre core increments, which is the approximate width of the instrument sensor. Core is removed from the core box and moved, if necessary, to a location where the instrument reads below background, and the measurement is collected by placing the sensor against the core at the required location. Background radioactivity is estimated at 200 cps, and values > 300 cps are considered to be elevated. The oriented drill cores are being subjected to comprehensive logging and sampling to characterize mineralization, alteration and structure. Drill core samples will be submitted to the Saskatchewan Research Council (“SRC”) Geoanalytical Laboratories (ISO/IEC 17025:2005 accredited) for uranium assay and multi-element characterization. Reflectance spectrometry will be undertaken on additional core samples to determine the presence of indicator clay alteration.

Unless otherwise stated, the historical results (including drill results) contained within this news release have not been verified and there is a risk that any future confirmation work and exploration may produce results that substantially differ from the historical results. The Company considers these results relevant to assess the mineralization and economic potential of the property. The historical drill results obtained by SMDC in drill holes CKI-9 and CKI-10 can be found within the Saskatchewan Mineral Assessment Database references 74N07-0310 and 74N07-0311.

Fortune Bay Corp. (TSXV:FOR, FWB: 5QN, OTCQX: FTBYF) is an exploration and development company with 100% ownership in two advanced gold exploration projects in Canada, Saskatchewan (Goldfields Project) and Mexico, Chiapas (Ixhuatán Project), both with exploration and development potential. The Company is also advancing the 100% owned Strike and Murmac uranium exploration projects, located near the Goldfields Project, which have high-grade potential typical of the Athabasca Basin. The Company has a goal of building a mid-tier exploration and development Company through the advancement of its existing projects and the strategic acquisition of new projects to create a pipeline of growth opportunities. The Company’s corporate strategy is driven by a Board and Management team with a proven track record of discovery, project development and value creation. Further information on Fortune Bay and its assets can be found on the Company’s website at www.fortunebaycorp.com or by contacting us as info@fortunebaycorp.com or by telephone at 902-334-1919.

Information set forth in this news release contains forward-looking statements that are based on assumptions as of the date of this news release. These statements reflect management's current estimates, beliefs, intentions, and expectations. They are not guarantees of future performance. Words such as “expects”, “aims”, “anticipates”, “targets”, “goals”, “projects”, “intends”, “plans”, “believes”, “seeks”, “estimates”, “continues”, “may”, variations of such words, and similar expressions and references to future periods, are intended to identify such forward-looking statements. Fortune Bay Corp. (“Fortune Bay” or the “Company”) cautions that all forward-looking statements are inherently uncertain, and that actual performance may be affected by a number of material factors, many of which are beyond Fortune Bay's control. Such factors include, among other things: risks and uncertainties relating to metal prices, changes in planned work resulting from weather, COVID-19 restrictions, availability of contractors, logistical, technical or other factors, the possibility that results of work will not fulfill expectations and realize the perceived potential of Fortune Bay's mineral properties, uncertainties involved in the interpretation of drilling results and other tests, the possibility that required permits may not be obtained in a timely manner or at all, risk of accidents, equipment breakdowns or other unanticipated difficulties or interruptions, the possibility of cost overruns or unanticipated expenses in work programs, the risk of environmental contamination or damage resulting from the exploration operations, the need to comply with environmental and governmental regulations and the lack of availability of necessary capital, which may not be available to Fortune Bay, acceptable to it or at all. Fortune Bay is subject to the specific risks inherent in the mining business as well as general economic and business conditions. Accordingly, actual, and future events, conditions and results may differ materially from the estimates, beliefs, intentions, and expectations expressed or implied in the forward-looking information. Except as required under applicable securities legislation, Fortune Bay undertakes no obligation to publicly update or revise forward-looking information. Fortune Bay does not intend, and does not assume any obligation, to update these forward-looking statements, except as required under applicable securities legislation. For more information on Fortune Bay, readers should refer to Fortune Bay's website at www.fortunebaycorp.com. 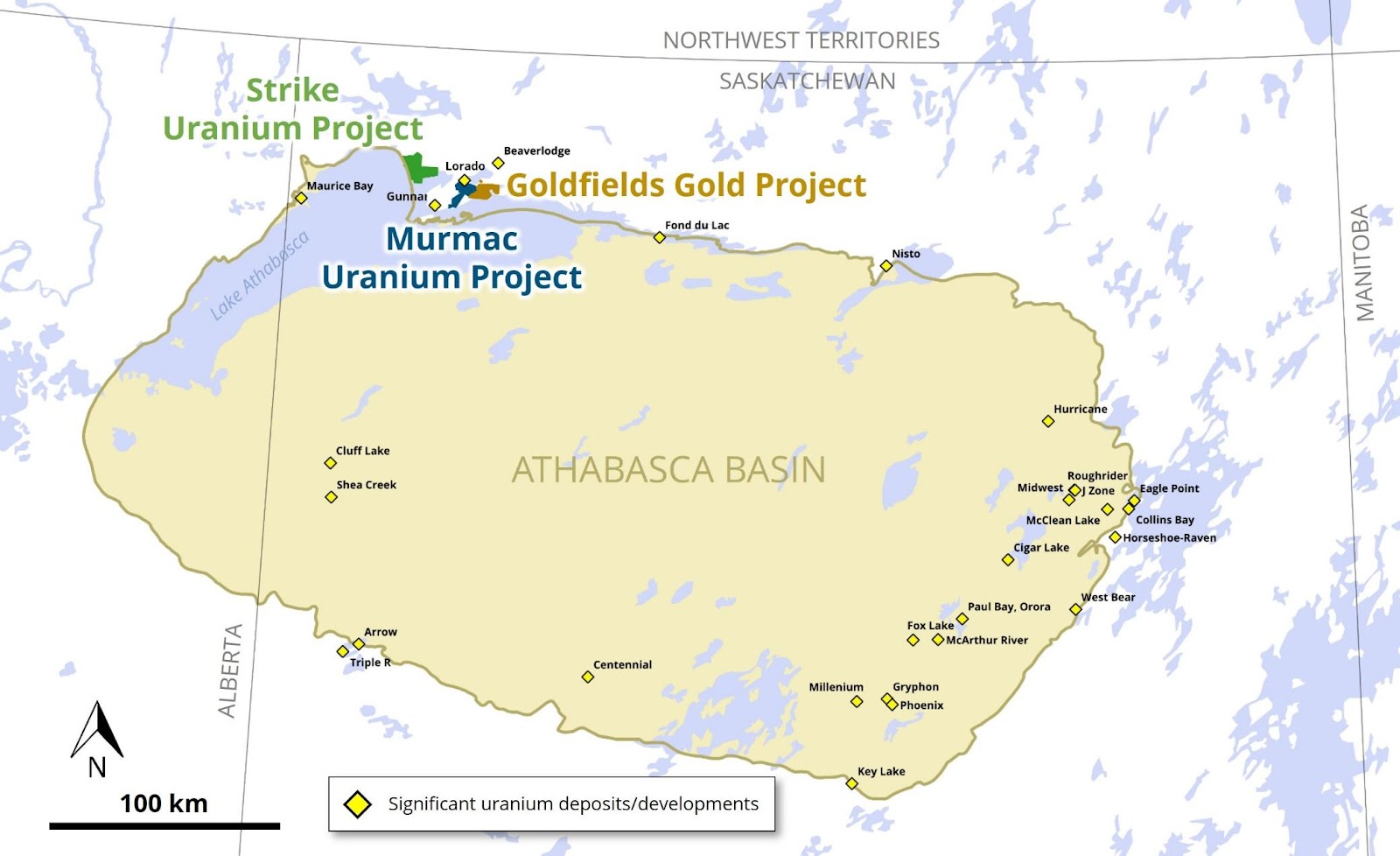 Figure 1: Location of the Murmac, Strike and Goldfields Projects relative to the Athabasca Basin. 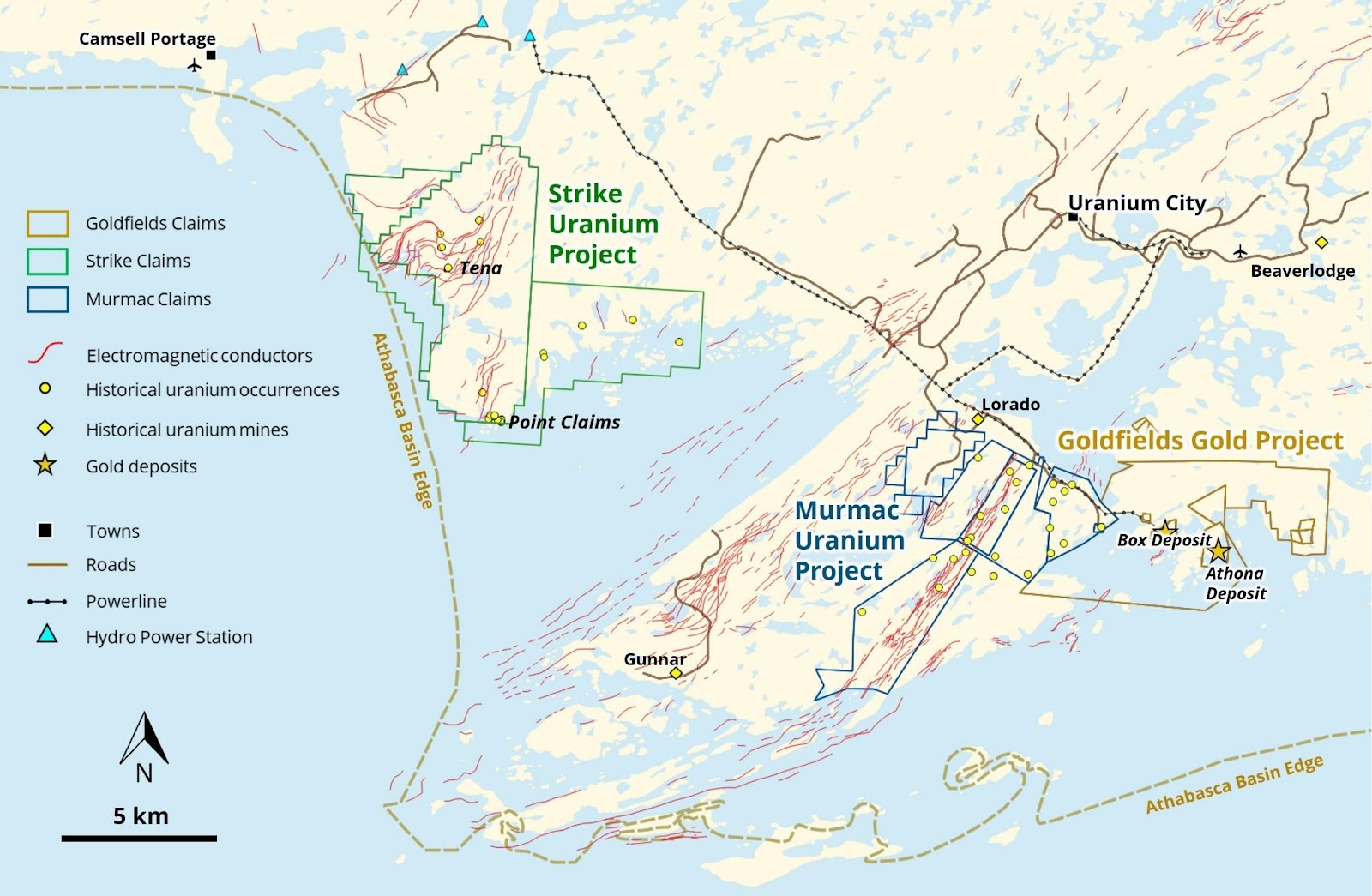 Figure 2: Location of the Murmac, Strike and Goldfields Projects. 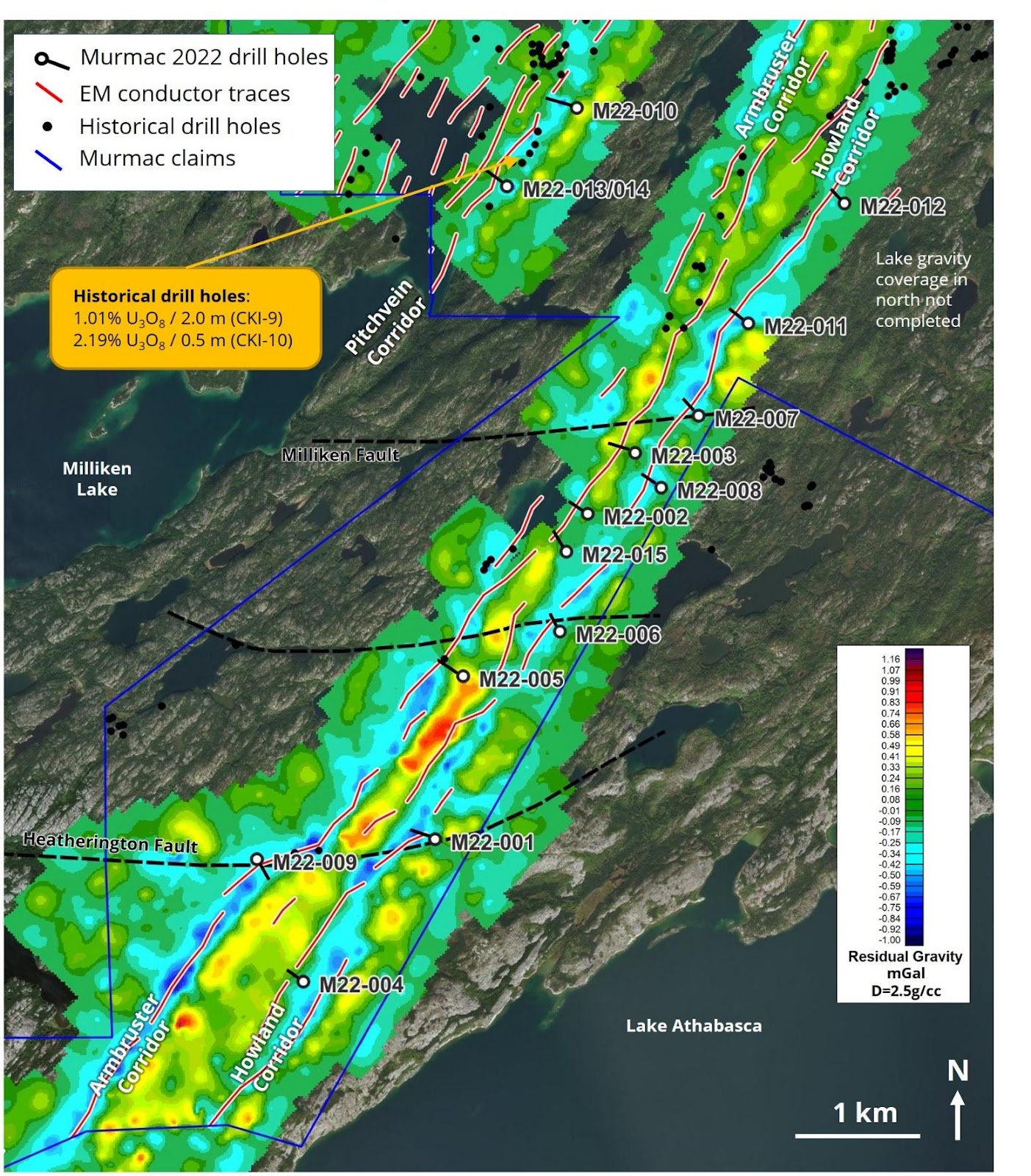 Figure 3: Location of the drill holes completed on the Murmac Uranium Project. 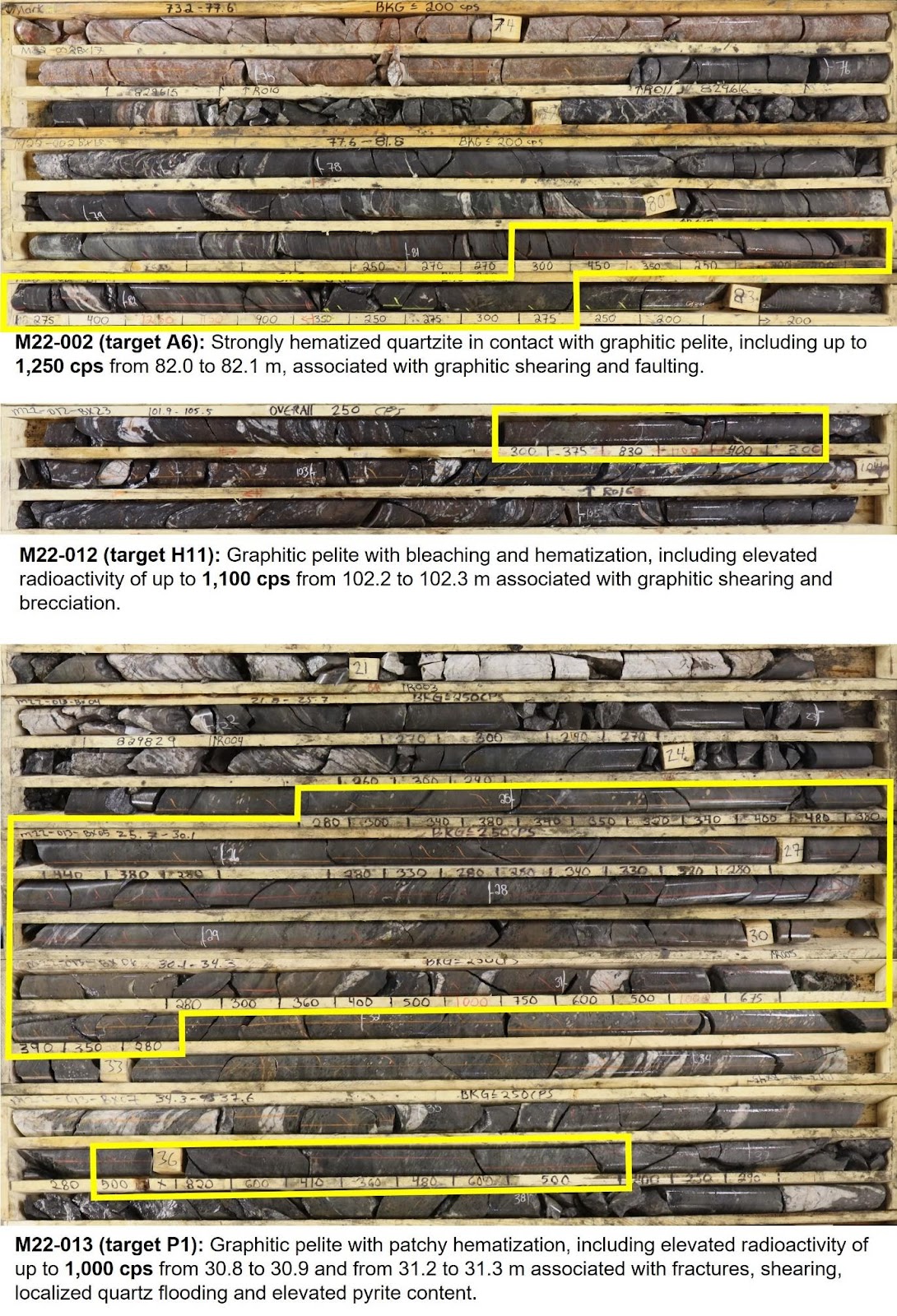 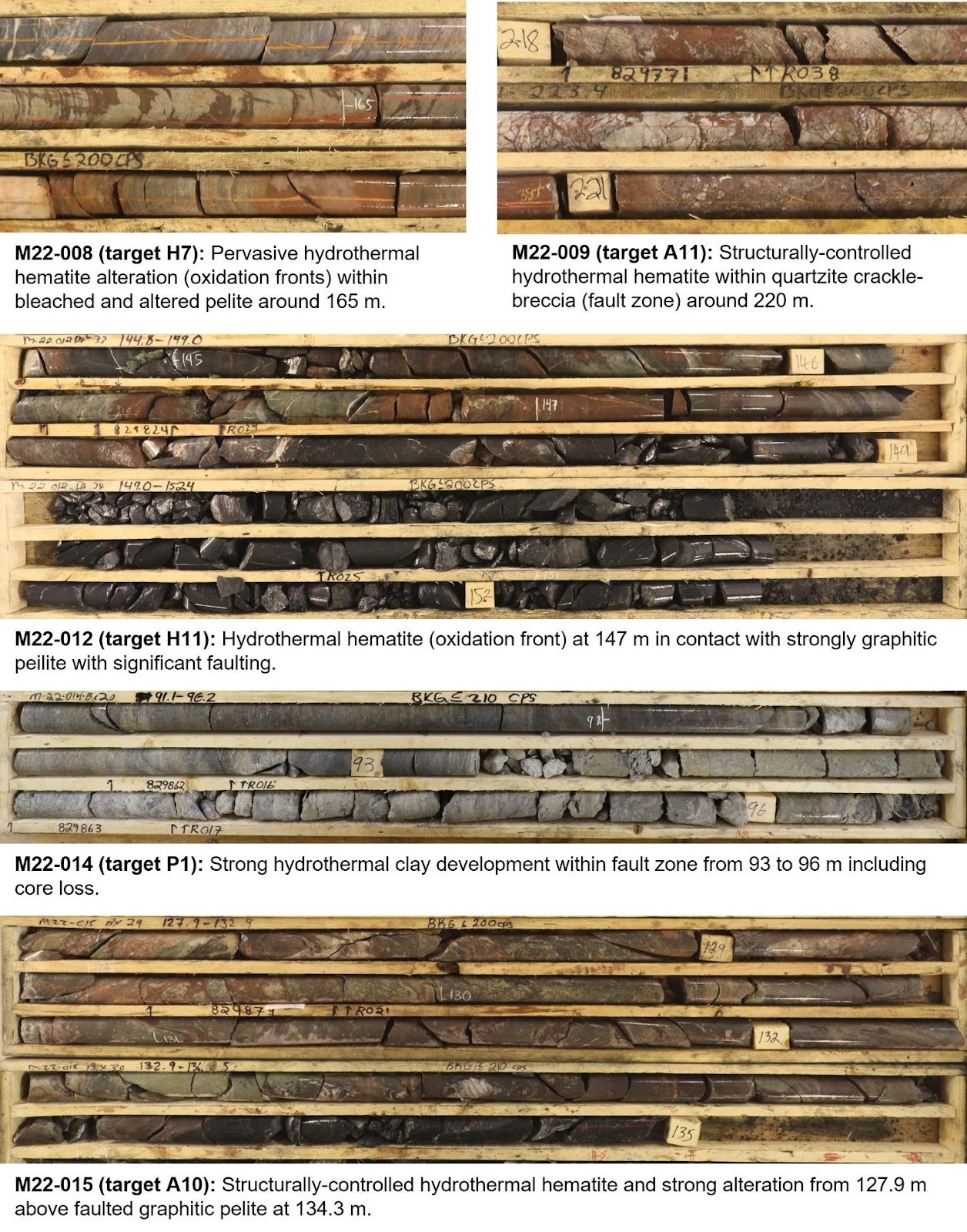