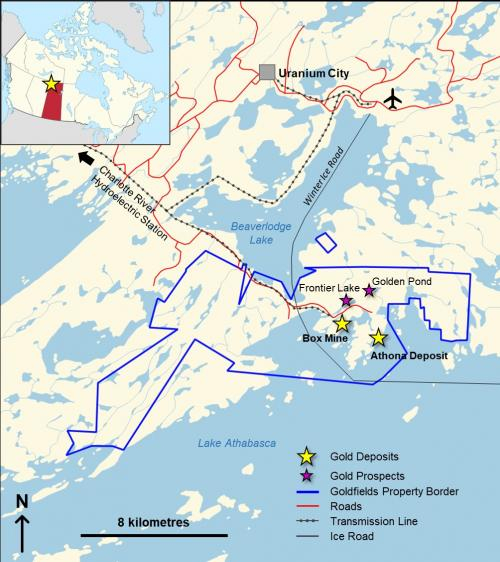 The Goldfields Project (“Goldfields” or the “Project”) is located approximately 13 kilometres from Uranium City, and approximately 60 kilometres south of the Saskatchewan and Northwest Territories provincial boundary. The Project is comprised of 22 mineral dispositions, covering approximately 10,300 hectares, and is host to the Box and Athona gold deposits and numerous other gold prospects and occurrences. The Project is endowed with established infrastructure including existing roads, powerline, and nearby facilities and an airport at Uranium City.

The Project has a history of gold production (64,000 oz produced between 1939 to 1942), numerous exploration drilling campaigns (over 1,000 drill holes) and various historical mining studies (including the 2007 Feasibility Study for the Box deposit and the 2011 PFS for the Box and Athona deposits that were prepared in accordance with NI 43-101). The Box open-pit mine and mill development is permitted having received Ministerial approval under the Environmental Assessment Act in May 2008. The Project presents numerous exploration opportunities, including the potential to expand the Box and Athona deposits and discover additional resources at several other gold prospects and occurrences.

A new Mineral Resource Estimate (“MRE”) was reported for Goldfields with an effective date of March 15, 2021. The new MRE replaces the historical MRE, as outlined in the historical 2011 Pre-Feasibility Study (“2011 PFS”), and serves to classify current mineral resources for the Project in accordance with National Instrument 43-101 (“NI 43 101”).

Highlights of the new MRE include:

The 2011 PFS, and the associated mineral resource and reserve estimates, are historical in accordance with NI 43-101, but are considered relevant to assess the economic potential of the Project.

The current MRE, with an effective date of March 15, 2021, was announced on March 22, 2021 by way of a Company news release, available on SEDAR (www.sedar.com) and the Company’s website. The MRE was prepared by SRK Consulting (Canada) Inc. (“SRK”). An Independent Technical Report titled “Technical Report: Resource Estimate for the Goldfields Project” with an effective date of May 4, 2021 prepared by SRK, supporting the disclosure of the MRE, is available on SEDAR and the Company’s website.

The technical and scientific information for the Goldfields Project on this website has been reviewed and approved by Dale Verran, M.Sc., P.Geo., Chief Executive Officer for Fortune Bay Corp., who is a Qualified Person as defined by NI 43-101. Mr. Verran is an employee of Fortune Bay and is not independent of the Company under NI 43-101.