The 100% owned Strike Uranium Project has been identified to have potential for high-grade unconformity-related, basement-hosted uranium deposits in a setting similar to other discoveries on the margin of the Athabasca Basin. 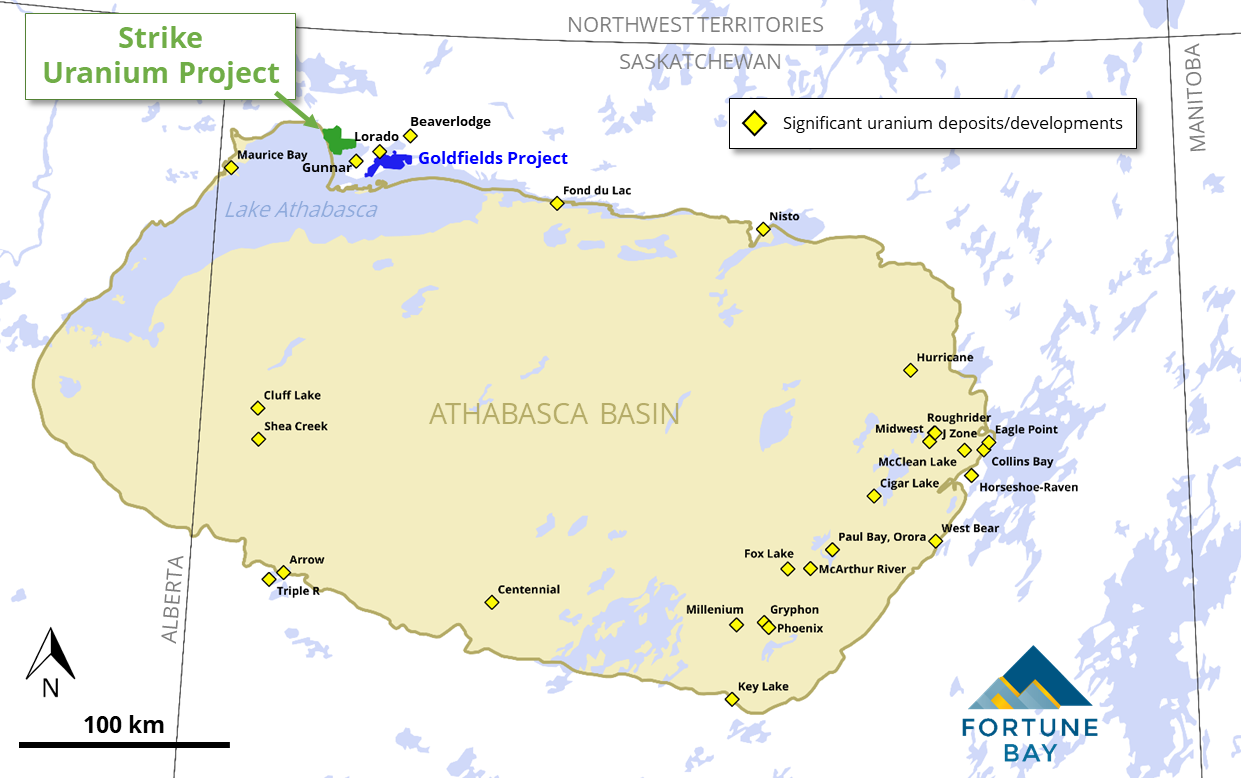 The Project covers an area of approximately 10,000 hectares and is located 25 kilometres west of Uranium City and the Company’s flagship Goldfields Project in northern Saskatchewan, and 15 kilometres southeast from Camsell Portage. Clean-energy hydro power stations are available within 10 kilometres of the Project to the north and regional airports are available at Uranium City and Camsell Portage. The Project is accessible year-round either by air (helicopter or fixed-wing), ice road (winter months) or boat/barge (summer months).

Previous work (from the 1950’s to 2008) and historical datasets support the Project’s potential for high-grade unconformity-related, basement-hosted uranium deposits in accordance with current exploration models for these types of deposits. Key exploration criteria identified include: 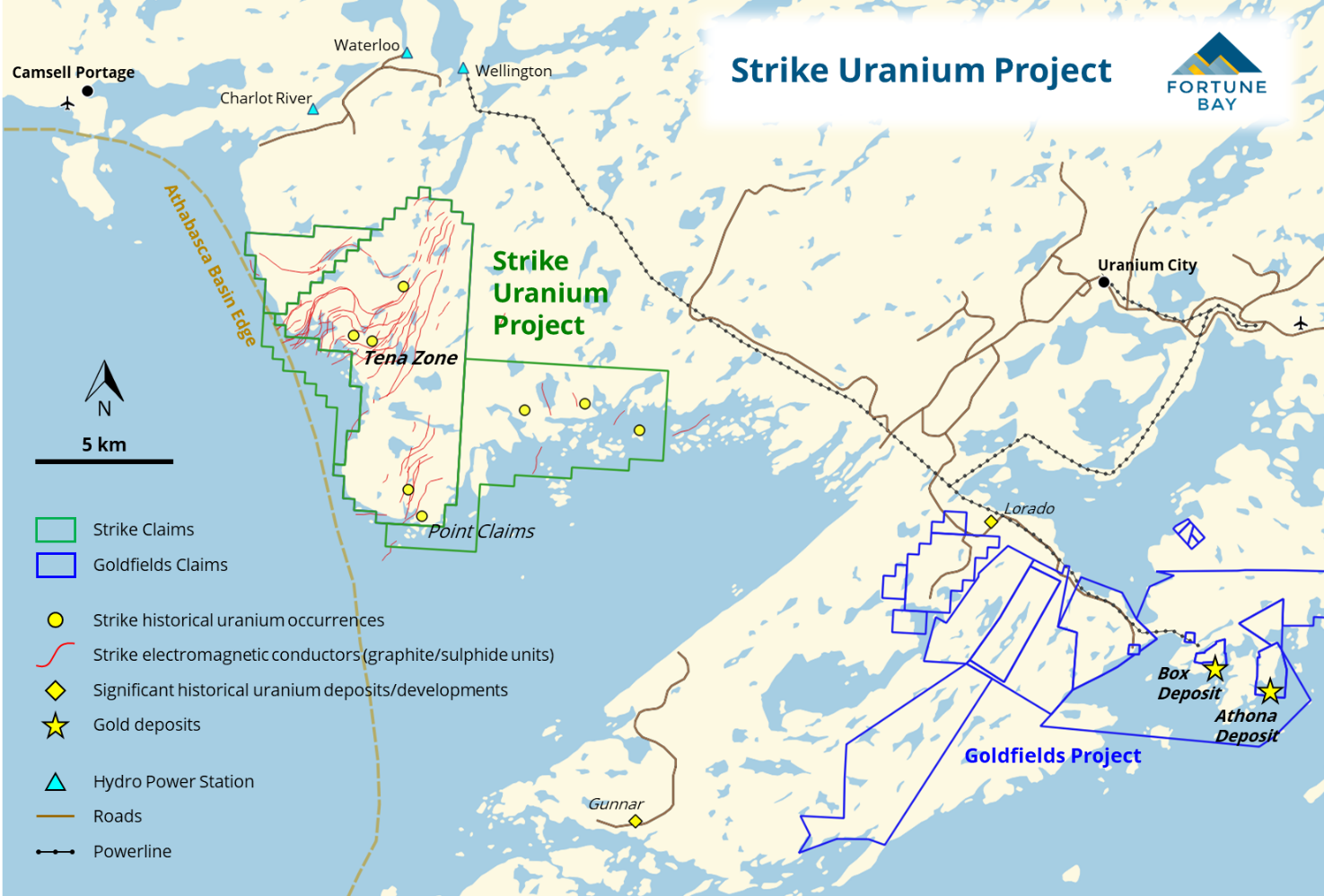 The first recorded uranium exploration in the area was carried out during the 1950’s by numerous junior mining companies. This initial work consisted primarily of prospecting and trenching, and numerous uranium occurrences were discovered. One of these occurrences, known as the Tena Zone, was mined on a small-scale during the late 1950’s, with ore shipped to the Lorado mill for processing. During the late 1960’s and early 1980’s, SMDC (now Cameco Corp.), Mokta and Jodi Energy Resources Ltd. completed more comprehensive work consisting of airborne magnetic and electromagnetic (“EM”) surveys with follow up ground EM surveying. Although these EM surveys did detect a significant number of ground EM conductors along the edge of the Athabasca Basin, diamond drill testing was very limited. Assessment records indicate that only seven drill holes have been completed on the property to date. Three of the holes are located near the Tena Zone with one hole intersecting 1.6% eU over 4 feet (eU is equivalent uranium derived from a downhole gamma spectrometer).

Work carried out by Cameco Corp. (“Cameco”) between 2005 and 2008 produced several high-quality datasets including airborne magnetic and electromagnetic surveys (VTEM), ground electromagnetic surveys (Max-Min and Step-Wise Moving Loop), and outcrop geochemical and reflectance spectrometry (clay) sampling programs. Cameco did not conduct any drilling on the project, and despite recommendations to advance the project the ground lapsed in 2012 (soon after the 2011 Fukushima nuclear accident). These publicly available datasets acquired by Cameco represent a valuable repository of data for the Project and provide an initial basis for drill targeting. A future ground gravity and magnetic survey may provide additional supportive data which would allow for prioritization of drill targets by delineating clay alteration zones (gravity lows) and structures (magnetic lineaments). 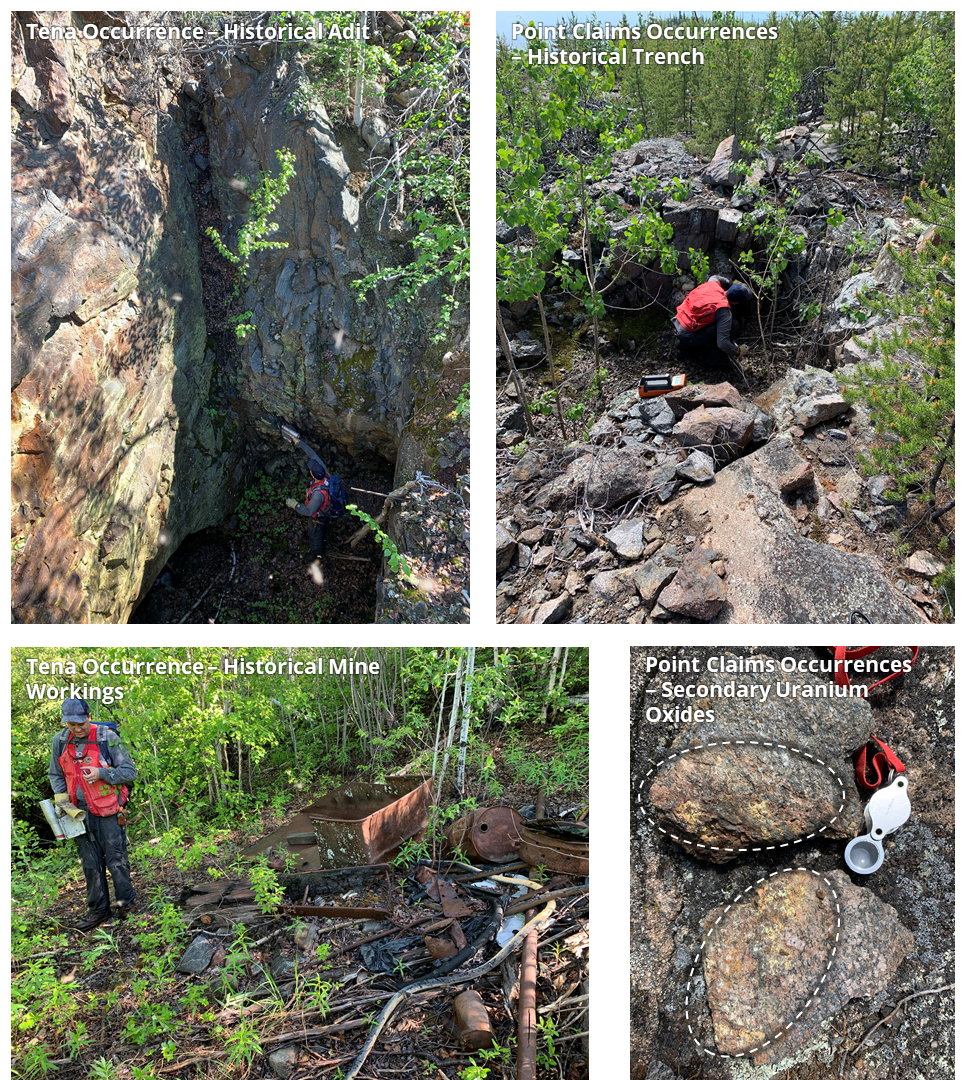 Uranium assays and geochemical analyses, provided in the table above, were undertaken by the Saskatchewan Research Council (“SRC”) Geoanalytical Laboratories. Sample preparation included drying, jaw crushing to 60% passing -2 millimetres, and pulverizing to 90% passing -106 microns. The resultant pulp was digested using a two-acid partial digest (HNO3:HCl) and the respective solution analyzed for multiple elements, including uranium, using ICP-OES. Boron values are obtained through NaO2/NaCO3 fusion followed by ICP-OES. Uranium assays are obtained using SRC’s ISO/IEC 17025:2005 accredited method for the determination of U3O8 wt%. A split of the sample pulp is digested using aqua-regia (HCl:HNO3 in the ratio 3:1), and the solution analyzed for U3O8 wt% using ICP-OES.